I now enjoy writing short stories. An idea hits you and you can pretty much pants out one to two thousand words. Even though number three under Urban Fantasy is the exact description of my entry for the Spring Contest. I realise I just can not copy and paste with updates and corrections, but there’s more in this competition. It is open to writers of all kinds to write a new story based on the contest theme, workshop it in our writing community, and submit it for publication.

All writers who participate may be published if they choose.

Contest theme: Choose one of the following writing prompts to base your story on:

Enrollment deadline: To participate, you must enroll for the contest by Monday, June 5. Your story will be due for work shopping on Monday, June 12. Your final submission is due Monday, June 19.

Use who with he/she

Use Whom with him/her

Nor follows neither and

Affect is mostly used as a verb and

Effect is mostly used as a noun.

Hanged only refers to the type of execution that strangles and breaks someones neck.

Hung is the past participle of Hang.

“I hung a picture on my wall.”

A good rule is that the sentence should still make sense if you take the other person out of the sentence.

“He doesn’t care much about my brother and me.” This still works as:

“He doesn’t care much about me.”

I don’t like the spelling of these words as they seem backwards to me.

Lose means you don’t know where it is at the moment.

If you can count it then use fewer, although if it is uncountable then use less.

“I have less tea in my cup and fewer biscuits.”

Alright—THIS IS NOT A WORD, DO NOT USE IT.

I have used Alright in an assignment and got the response that it’s archaic.

If you take the word to the letter “Ultimate,” it actually means the last one. So—”The ship Titanic sank on its ultimate voyage.”

Advice—Do not call big events in anyones life “An ultimate day in ones life,” unless of course it was the last day of someones life and a tragedy.

Use Than when comparing

“My home is warmer than yours.”

With everything else use ‘Then.’

The websites and applications listed above are what I use most days. I am still in the write/edit zone. I do not write within any of these applications as a little red line appearing under the last word you wrote is a little disheartening. But at the end of a long writing stint I do copy and paste into these website or applications. The WordPress is a website creator where you can create your own website for free or for £30 per year get your own web address.

Grammarly is free on the internet, but if you want an application to fit into Microsoft Word or scrivener. I use it a lot ans it gives you weekly word counts and an assessment of your writing.

It is comprehensive, but I got a 100% good report for mt short story and I was told on a review that I had gramma problems. He didn’t say what though.

This application is not free but it does highlight words that you can list as vague and not wanted. It is available on the Apple App Store.

Two reviews of My Short Story are listed below:

Within the text of a novel, it’s best to use contractions. Here are a few:

Its or It’s
The contraction of it is = it’s
The possessive term of it = its
Examples:
It’s my Birthday.
My dog wags its tail.
I leave my house by its front door.

There is no such term its’

Who’s or Whose
The contraction of Who is = Who’s
The possessive word of who = whose
Examples:
Who’s paying the bill?
Whose house is this?

They’re or Their
The contraction of they are = they’re
The possessive term of they = their
Examples:
Bill said they’re his clothes.
The problem is their fault.

When writing a novel, there will be numbers used like dates, times, years, ages, money, and just quantities of anything.

Do not start a sentence with a numeral, as it is distracting:

The common practice is:

Some writers spell out all numbers from one to one hundred and use numerals for anything higher as nine thousand four hundred and sixty-two is a little more wordy than 9462.

“Brian gets £45 an hour,” is somewhat better to read than, “Brian gets fourty-five pounds an hour.” 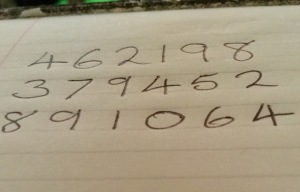 There is actually a difference between a plot and a story. It’s like a novel and a movie.

So, movies show a lot of scenes with action things happening that are usually dramatic. Most movies show activities from the perspective of many people. Things happen to the characters, the protagonist and antagonist, along with other extras embark on a journey of excitement. Each character shows emotions and attitude towards or against the things happening.

A Movie, most movies show activities and show their feelings towards some action. Some movies follow a narration from the protagonist or antagonist. This character is always in every scene, and thus narration.

A plot is the action and what happens within a scene in a movie or novel. Movies are flooded with the plot.